This year’s Velka Pardubicka was full of drama, stories and successes. The 131st running of the Velka Pardubicka with Slavia Insurance was won on his third attempt by a 10-y-o gelding with a name that indicates hope for success. Czech-bred Talent, ridden by Pavel Složil jnr., trained by Hana Kabelková, bred by her husband Michal Kabelka and owned by the Kabelkas, won in an exciting finish. Hana Kabelková is only the third woman to have prepared the winner of the legendary race.

The story of this year’s edition of the race started getting complicated during the races earlier in the afternoon. In the second race, the VCES a.s. Stakes – Lata Brandisová Stakes, jockey Jan Odložil was injured, and trainer Stanislav Popelka had a problem to deal with. Lombargini was all of a sudden without a jockey, and Martin Liška had to be called in at short notice. However, that had not necessarily been the last option. Irish jockey Patrick Mullins was accompanied in Pardubice by English jockey Bryony Frost, and she was for a while under consideration. Trainer Gregorz Wroblewski had already announced a jockey change. French jockey Romain Julliot would replace Sertash Ferhanov in the saddle of Sztorm. Julliot had become available after Vandual, one of four Slovak-trained declared runners, was scratched.

18 runners set out for this year’s Velka Pardubicka. Right after the start, the field was stretched out. Among the first to reach the Taxis were Player (Marcel Novák) and Kaiserwalzer (Patrick Mullins), neither of which got beyond this obstacle. Both had been well fancied before the race. Player did not land his jump successfully and Kaiserwalzer’s jockey was unseated. The chances of another fancied runner, Lombargini (Martin Liška), came to an end at the French Jump. The next drama was just before the Small Gardens double fence, when a loose horse ran across the front of the field and forced Sztorm and Beau Rochelais (Adam Čmiel) beyond the obstacle. While Beau Rochelais was able to rejoin the other horses, Sztorm’s race was over. Theophilos, ridden by Josef Bartoš, fell at the Extended Taxis fence. The winning horse of 2019 was uninjured, but Josef Bartoš was taken to the hospital for a check-up. As he regained his feet, Theophilos was caught under the legs of Paris Eiffel, whose jockey, Martin Cagáň, had no chance of reacting to the situaton. The youngest runner in the Velka Pardubicka, Mahe King, was pulled up after the Big Water Jump by his jockey, Jan Faltejsek, and later in the race Beau Rochelais and the only mare among the runners, Vanesse (Jordan Duchene) were both pulled up.

The winner and all of the places were decided by contests between the horses in the finishing straight. 7-y-o Evžen, prepared by trainer Štěpánka Myšková and her husband, Evžen’s jockey Jaroslav Myška, set off to win the Velka Pardubicka at the horse‘s first attempt. However, Talent and Pavel Složil jnr. came with a strong finish and overcame their rival. Talent had shown his potential in previous seasons,  but this  was the moment when his time came.

“He showed me last year that he could have won. However, it was my ninth ride on the day, and I shouldn’t have been riding in the Velka. We made a mistake at the Big English Fence, and we lost contact with the leaders. If we hadn’t needed to catch up, it would have turned out better last year,“ Pavel Složil says, recalling his fourth place in the Velka Pardubicka. “This year we were lucky to avoid the collision in which Theophilos came down. It was a near thing. I kept trying to avoid collisions. I followed experienced horses, and I thought we could get home. I knew well that Evžen is a real battler, and for a long time I couldn’t get past him in the finishing straight. Then Talent came  again, and  it all worked out,“ said the jockey, whose father, Pavel Složil senior, finished in second place in the race in 1997, on Marketplace.

“We didn’t do anything differently this year, or maybe we adjusted his training regime slightly because of his health situation. He spent three or four days in Moravia doing water training, which is good for him and basically supplements the work he does at home. Last year we were in contention, but Pavel and Talent did not know each other so well. This year, the horse knew well what he had to do, and it all worked  out,“ Hana Kabelková says. She trains in the family’s training centre at Vápenný Podol, a village not far from Pardubice racecourse. Talent is home-bred by Michal Kabelka and Hana Kabelková.

OTHER RACES ON VELKA PARDUBICKA DAY

The 131st running of the Velka Pardubicka with Slavia Insurancewas not the only rmajor race on the card on October 10th. There were seven other good quality, prestigious races, many of which count as preliminary trials for the Velka Pardubicka. There were 10 runners in the Chládek&Tintěra, Pardubice a.s. Stakes – Labe Stakes, but only half of them got round to the finishing post. The winner was Aeneas, trained by Josef Váňa, and ridden by Josef Bartoš. He finished a long way ahead of Zataro (Romain Julliot), Del Rey (Pavel Složil jnr.), Sacamiro (Jakub Kocman) and Saint Joseph (Jan Faltejsek).

The Governor of the Pardubice Region Stakes – Vltava Stakes was won by Chelmsford, trained by Josef Váňa, which continued on his unbeaten run. This 5-y-o last failed to win in July 2020. Ridden by Josef Bartoš, he finished ahead of Dajuka (Lukáš Matuský), one of the other well-fancied runners. They finished well ahead of Chicname de Cotte (Jordan Duchene) and Godfrey (Daniel Vyhnálek). The other three runners did not get round.

In the Popler Memorial, sponsored by the Profireal Group, Jaroslav Myška showed his experience. He was in the saddle of Chrystal Cross,  a  specialist in crosscountry sprint races over two miles, and he did not allow himself to be distracted when Lad In (Pavel Složil jnr.) went away from the field. Myška gradually pulled him in after the horses got on to the grass track, 600 metres from home, and after the last fence he went past his challenger. Third place went to Usockem (Jordan Duchene), and they were followed home by Lianel (Jakub Kocman), Kifaaya ( Romain Julliot) and Charismatic (Adam Čmiel).

In the first race of the day, the Silver Trophy – Staropramen Brewery Stakes, the only race of the day on the classical steeplechase course, the favourite, Dominique, fell at the last fence and opened up an opportunity for 6-y-o Foudre d´Allier (Jan Kratochvíl). They were followed home by Arlington (Jaroslav Myška), Dusigrosz (Josef Bartoš), Polidar (Veronika Řezáčová-Škvařilová) and Portorikos (Pavel Složil jnr.).

The Kudy z nudy Stakes – Czech Steeplechase Association Stakes –- was a race between Gatsby (Jan Faltejsek) and Giorgione (Josef Bartoš). The fevourite, Gatsby got away well, but he was caught by Giorgione. However, Gatsby fought back after the last fence and won the race. They were followed home by Čáryjape (Lukáš Matuský) and Frenki (Jan Kratochvíl).

Eight horses ran in the BICZ Holding 2021 Handicap. Kornelia, ridden by Jakub Kocman, was held back until the last third of the race. Then she started to move forward, and she gradually beat off the challengers. In the finishing straight, she caught the leader, Sexy Lord (Pawel Palczyňski), the biggest surprise of the afternoon. Leo Fantastico (Ondřej Velek), Youko (Jan Faltejsek) and the favourite, Taste of Rock (Jaroslav Myška), finished way behind these two. 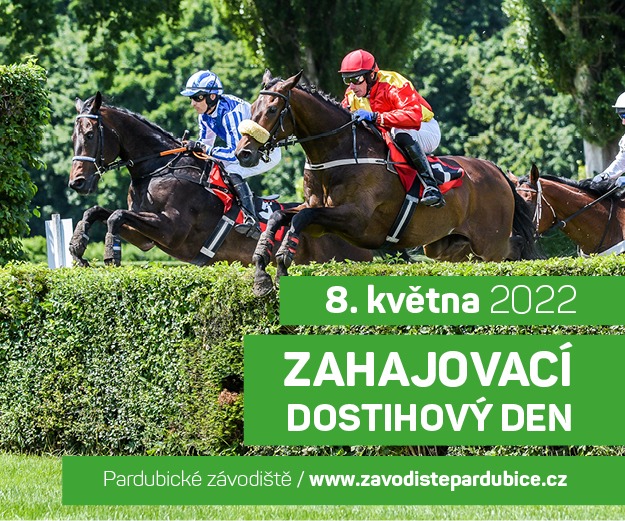