After a night of rain 4 days before the race, and a lot of work by the ground staff, Pardubice racecourse was in good condition for the 131st running of the Velka Pardubicka with Slavia Insurance, under the auspices of the Minister of Agriculture. The going was 3.4 (good), and the ploughed fields were in ideal condition – neither dusty nor muddy. It was a cool sunny October afternoon. Last year’s 130th running of the Velka Pardubicka was held behind closed doors. This year, in the end, there were no restrictions on the size of the crowd, though the threat of limitations had hung over the race until just before the race. A good crowd of about 15 000 turned out. This is considerably fewer spectators than on some recent sunny second Sundays in October, but more than satisfactory considering the impact of the pandemic and of uncertainties until the last moment about the conditions for admission to the racecourse.

18 runners started in the race. The favourite was 12-y-o No Time To Lose, trained by the legendary Josef Váňa senior and winner of the Velka in 2017, closely followed in the betting by 7-y-o Evžen. There was an uneven start, with three or four horses still coming into line when the starter sent them away. Star, the grey horse, was last away, and was at least 15 lengths behind the leaders when he reached the first fence. All the horses negotiated the first three obstacles safely, and then approached the Taxis. This famous fence, which is only ever jumped in the Velka Pardubicka, had been redesigned since the previous year, with a view to making it safer for the horses. The major adjustment had involved filling in the ditch beyond the fence, so that horses jumping short now land on soft ground sloping only slightly upward, rather than landing in, or on the edge of, a deep ditch. Nevertheless, the Taxis remains a challenging jump, due to its height in combination with its considerable length.

Player, which had finished 2nd in the 2020 Velka, led the field into the Taxis. He put in a very long jump, but failed to land it safely and fell. The horses that had followed closely behind the leader needed to avoid trouble. All the horses managed to remain on their feet, and only one unseated his rider. Kaiserwalzer and Irish amateur jockey Patrick Mullins parted company. The attempt to redesign the Taxis and make the obstacle safer for the horses while retaining its iconic look earned the approval of most people. Some in the horseracing community did not like the idea of interfering with the historical fence, and others would have preferred more radical changes. However, the design and the implementation of the design definitely passed the test on October 10th.

The next two obstacles – the Irish Bank and the Popkovice Turn – caused fewer problems than usual, and all the 16 remaining horses got over them successfully. Riderless Kaiserwalzer had rejoined the runners, and he approached the Popkovice Turn Fence hesitantly. However, he did not cause any real problem. Star’s jockey, Jaroslav Brečka, struggling with a slipped saddle since the Taxis and struggling with a headstrong partner since the beginning of the race, did well to stay on at the Popkovice Turn. At that point they were still in last place, so their problems did not affect the other runners.

At the French fence, behind the copse, Lombargini fell at the rear of the field. Martin Liška had taken the ride after Jan Odložil withdrew following an injury in fall in a race earlier in the day. As the horses approached the Small Garden Fences (a double fence) Sztorm was in the lead, alongside the loose horse, Kaiserwalzer. At the last moment, the loose horse ran right across the fence, from the inside to the outside. He made contact with Sztorm, forcing him off the course and out of the race. Beau Rochelais was also interfered with, but was able to continue in the race. The remaining runners narrowly avoided piling up, and they all scrambled over the double fence.

After the double, there is a calm period in the race, as the horses run round the edges of a large field known as the Náměstí, i.e. the Square (a central square is a feature of a typical Czech town or village). There are no major obstacles on the Square, and the jockeys are able to look around, take stock and wipe the mud off their goggles. Not much need for wiping the goggles this year this year, as the ploughed fields were – unusually – neither dusty nor muddy. The pace dropped, and Beau Rochelais and Star were able to catch up with the others. Star continued to perform erratically but heroically, and decided to join and remain with the leading group. At the innocuous Extended Taxis fence, 2019 VP winner, Theophilos fell near the head of the field.  His jockey, Josef Bartoš, suffered a bad injury (a broken pelvis) either from the fall or when he was struck by more than one of the passing horses. Paris Eiffel was brought down. Stretton, Evžen, Hegnus and Star ran prominently, wtehile the favourite, No Time To Lose, was held back at the rear of a compact field.

There were still 12 horses on their feet as they passed in front of the grandstands. Evžen’s jockey Jaroslav Myška had been unseated in the July qualification race for the Velka, and again earlier in the afternoon of the current day, when his horses slipped up on the approach to the Big Water Jump. Myška led the field safely through what must be a soft and slippery area that seems to have appeared this year. At the fence after the Big Water Jump, Jan Faltejsek pulled Mahe King up. The horses passed behind the copse again, and after the Hangar Fence, the race was on.

Horses trained by Josef Váňa usually start making their move at the English Fence, 1 200 metres from the finishing line, as they start running across the field before turning on to the racecourse with 600 metres and three fences to go. With Theophilos and Mahe King already out of the race, only No Time To Lose, the favourite to win, remained in the race for the legendary jockey, who is also now long-established as a legendary trainer. No Time To Lose was some way behind, in 8th or 9th place, but a lot of ground can be made up over the last 1 200 metres of the Velka Pardubicka. Meanwhile, Beau Rochelais and Vanesse were dropping back. These two would eventually both be pulled up.

Evžen, Stretton, Hegnus and Talent led over Havel’s Jump, the 4th from home, with Mr Spex and Star still contending. No Time To Lose still had some ground to make up, and Casper and Dulcar de Sivola were beginning to lose contact with the leaders. The race was really on. Evžen was the leader, with Stretton and Hegnus in hot pursuit, and Talent and Mr Spex were still in touch. After the second from home, Evžen momentarily seemed likely to go away and win comfortably. However, Talent quickly closed the gap, while Stretton began to drop back. Evžen and Talent took the last fence together, and fought head-to-head until Talent won the contest and passed the post one length ahead. It felt as if they must have accelerated away from the rest in the finishing straight, but Mr Spex, ridden by Jan Kratochvíl, finished only 5 lengths behind in 3rd place, and No Time To Lose passed tiring horses to take 4th place, 5 lengths further back. No Time To Lose had never got on terms with the leaders. Hegnus finished 5th, and then there was a gap before Star, Stretton, Casper and, finally, Dulcar de Sivola struggled past the winning post.

Talent is owned by Michal Kabelka and Hana Kabelkova, is trained near Pardubice by Hana Kabelková, and was bred by the Kabelkas.

Talent was ridden by23-year-old Pavel Složil junior. His father, Pavel Složil senior, finished 2nd in the Velka Pardubicka in 1997, on Marketplace. That race was won by Vronsky.

Pavel is based in the Czech Republic, but also rides extensively in Italy and at Wroclaw, in Poland, like most of our leading jumps jockeys. At the age of 23, Pavel is several years younger that our other elite jumps jockeys, and the shortage of young jumps jockeys in central Europe is a matter of concern. This year, only two of his 23 wins have been in the Czech Republic, though he has made himself available to ride in the meetings at Pardubice and in the main Czech races over fences. He rode at Nancy, in France, for trainer Josef Váňa junior, the day before his win in the Velka.

Nowadays, Czech jockeys and Czech-trained horses are indispensable at steeplechase meetings not only in the Czech Republic, but also in Slovakia, Poland and Italy. The racing calendars in these four countries are coordinated so that scarce jockeys can be available to ride at all meetings that include steeplechase races anywhere from Wroclaw to Pisa. Thanks to EU membership, EU agreements on veterinary reqirements, and the Schengen agreement, mobility of horses and jockeys now goes ahead very smoothly, even in the Covid era. Nevertheless, riding at Pardubice on a Saturday and at Merano on the Sunday involves a six-hour drive.

15:45 8th race
131st running of the Velká pardubická with Slavia Insurance, under the auspices of the Minister of Agriculture
Crosscountry steeplechase, Category: Listed, 6900 metres, CzK 3 000 000 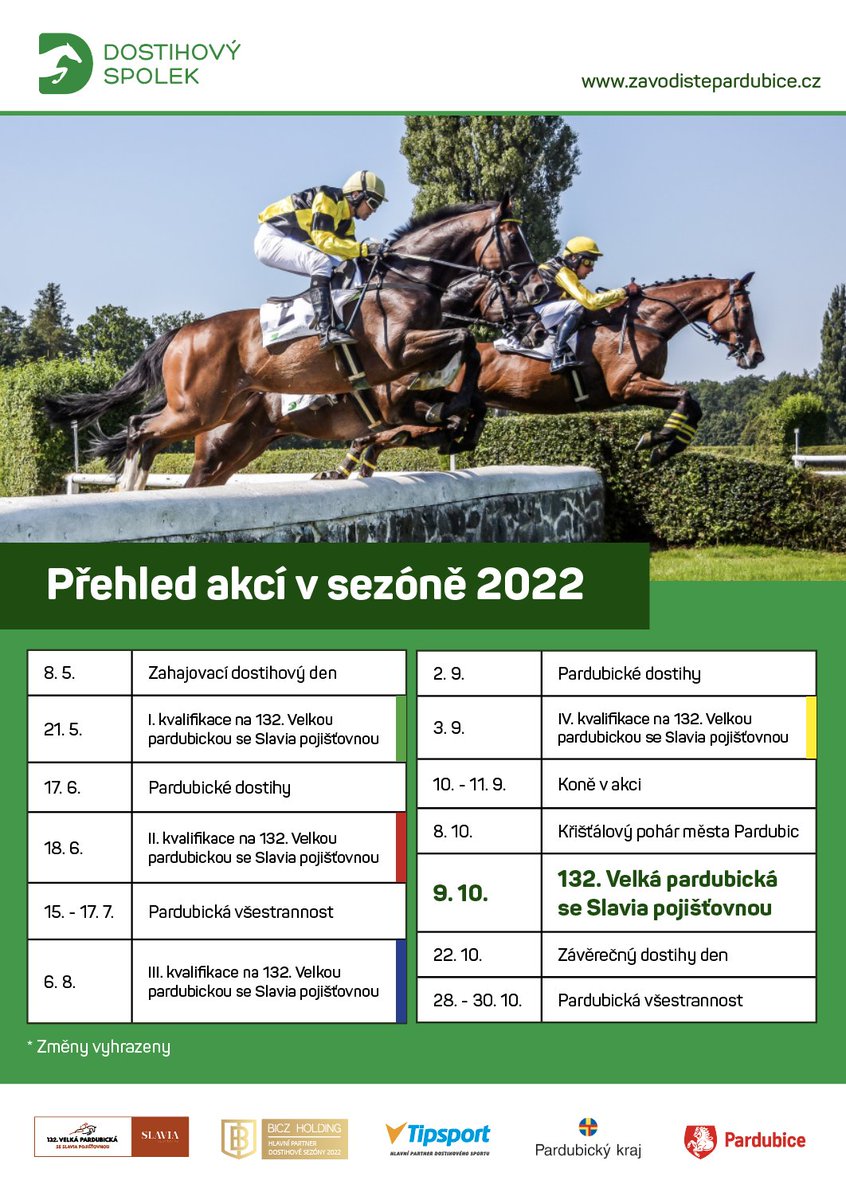 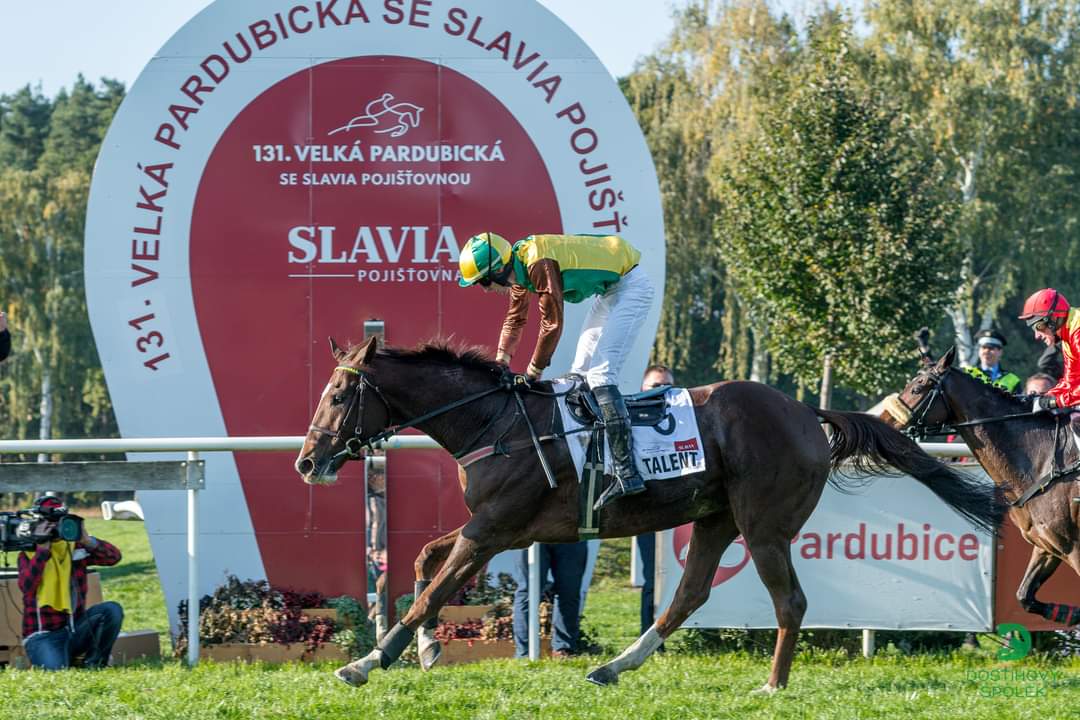